There's plenty written about database mirroring already, a cool new feature of SQL which enables you to create a hot standby (read: automatic failover) for a database on your server (read: NOT the whole server)...

One tip: If you are mirroring across any significant distance, and require synchronous mirroring, take lag time into account, as you will nto commit for the 30-90 ms round-trip time it takes to push the change out to the target server.
Posted by Jeff Garbus at 7:34 AM No comments:

Hi,
We're offering a free, one-hour tuneup of your target database server. In order to take advantage, go to:
www.confio.com/sec
to download monitoring software, then email me (jeff@soaringeagle.biz) for a trial key, and we'll set it up.
No cost, no obligation, but we do find that most of the folks who take advantage fall in love with the tool or the service...

Posted by Jeff Garbus at 7:32 AM No comments:

I've been talking about this for years, but every once in a while I see a nose rubbed in it, and the results can be dramatic.

The SQL Server optimizer, in some versions (this is SQL 2005 SP3) will not properly resolve statistics if the data types of the declared variables & the compared columns don't match.

The solution: Match up your data types.

In the code sample below, I was looking at a query that was accessing SQL Server from Ruby--on-Rails. The ONLY difference in the code is that in the first example, the data type is being passed in as nvarchar(4000), and in the second exanmple it's varchar(255) the actual data type.

Code (reproduced with the kind permission of my client): 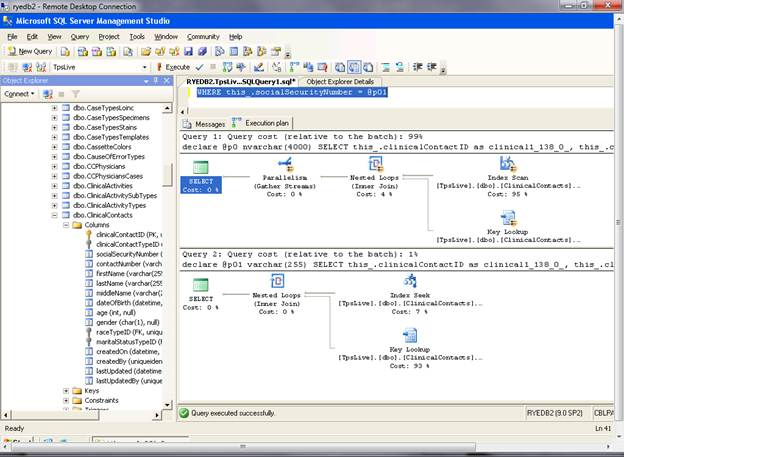 Posted by Jeff Garbus at 7:23 AM No comments:

Jeff Garbus
I've been consulting on and performing technical training for MS SQL Server since 1989, Version 4, on OS/2, and Sybase ASE since release 4.0.1. Since then, I've worked extensively with each release of the product, specializing in performance and tuning, from concept through legacy system, on systems of all sizes, from small start-up company applications to multi-terabyte data warehouses. I have been working on large-scale systems for most of that time, having tuned a 100-gig/week throughput application on MS SQL Server 6, and created one of the first ASE data warehouses. My background includes work experience from PC's to Mainframes and back again, in all aspects of IT, from developer, to DBA Manager, to IT Executive. My specialty is performance and tuning with a special emphasis on large-scale projects with very large databases. I am very well known in the industry, having spoken at user conferences and user groups for many years, written articles and columns for many magazines nationally and internationally, as well as having written over a dozen books.